Invasion of the Copycat Legislator 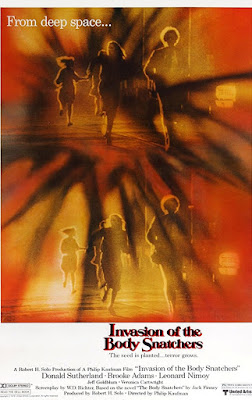 As a kid in the early '80s I watched the film Invasion of the Body Snatchers. Aliens come to takeover earth by creating replacement people who look ordinary in every way, except that they lack any emotion. These imperfect doppelgangers roam the city, inconspicuously hunting for other humans to clone. The idea that Aunt Helen could be an alien and I would not know until I fell asleep and she turned me over to the cloning department totally freaked me out.

So what does this movie have to do with zoning? Today’s paper brings us news that like the anti-superstore legislation introduced on Kauai, that would prohibit stores over a certain size, the Maui County Council is also considering a similar bill. Maui’s bill “would set limits on retail facilities or expansion of retail facilities exceeding 90,000 square feet, offering more than 25,000 different products or dedicating more than 20,000 square feet to groceries.” (See Melissa Tanji, Maui bill proposes prohibiting superstores, Hon. Ad., Aug. 18, 2007.)

Unfortunately for many citizens of Maui who appreciate the benefits of market competition and jobs that stores like K-Mart, Wal-Mart, Target, Best Buy, Bed Bath and Beyond, etc. can potentially provide, anti-superstore/anti-economic growth legislation has invaded Maui’s Council. Most troubling is that the Council has not put forward any studies that show existing businesses would be affected by such stores or any other evidence that this type of legislation promotes the general welfare of the community.

I think most people will agree that having a strip-mall that blankets the island is not desirable, but that’s part of planning; i.e., to layout where things should go in the living environment. Proper planning that balances the types of uses and industry desired in various regions is preferable to the blunt, blanket legislative policy proposed here.
Posted by Hawaii Land Use Law and Policy at Tuesday, August 21, 2007
Email ThisBlogThis!Share to TwitterShare to FacebookShare to Pinterest
Labels: Zoning