Is Hawaii Losing Open Space and Agricutural Lands at a Critical Rate?

Section 6 of the 2007 State of Hawaii Data Book has records for the amount of lands classified in the four state land use classifications from 1969 to 2006.

From 1969 to 2006, the change of land in each land use classification was as follows: Urban, increase of 41%; Conservation, decrease of 2%; Agricultural, decrease of 1%; and Rural, increase of 71%. However, the percentage of land classified in each category remained relatively stable as a percentage of the total land mass of the state between 1969 and 2006, as illustrated in the following pie charts (note that Rural shows 0% because it is less than 1%): 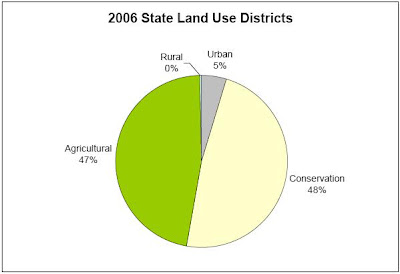 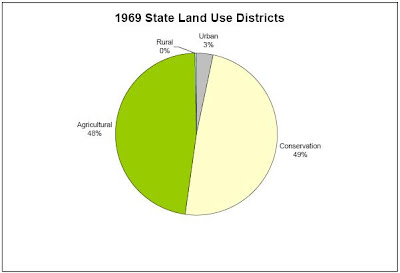 The numbers clearly illustrate that the state's land use regulatory system under HRS chapter 205 has kept over 95% of Hawaii's land mass in the Agricultural and Conservation districts since 1969, which has the effect of constraining urban development, preserving open space and recreation areas, and retaining large swatches of agricultural land. That's what the numbers would tell us anyway.
Posted by Hawaii Land Use Law and Policy at Tuesday, April 28, 2009
Email ThisBlogThis!Share to TwitterShare to FacebookShare to Pinterest
Labels: Planning, Zoning