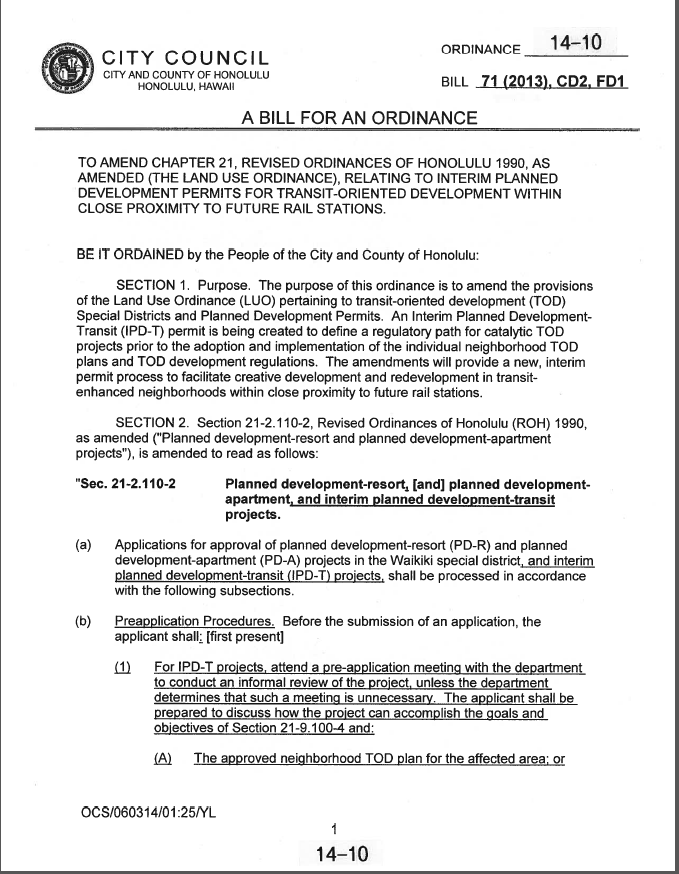 Under Revised Ordinances of Honolulu (ROH) § 21-9.100, “the use of neighborhood TOD plans shall be the preferred way to create TOD development regulations for each TOD zone.”  However, creating neighborhood TOD plans is a lengthy process.  While the City has made significant progress on these plans, only the Waipahu and Aiea-Pearl City Neighborhood TOD Plan have been completed. Implementing zoning and regulations have not been submitted to Council for review and approval.

Recognizing that some developers are ready to start planning and investing in TOD and the potential community benefits these investments can provide, the City and County of Honolulu created the Interim Planned Development-Transit (IPD-T) permit under Ordinance 14-10.  Established on June 20, 2014, the IPD-T permitting process allows “TOD projects prior to the adoption and implementation of the individual neighborhood TOD plans and TOD development regulations.” Under the Ordinance, “[q]ualifying projects must demonstrably exhibit those kinds of attributes that are capable of promoting highly effective transit-enhanced neighborhoods, including diverse employment opportunities, an appropriate mix of housing types, support for multi-modal circulation, and well-designed publicly accessible and useable spaces.”

Use of the IPD-T process is limited to the following projects:
The IPD-T permitting process grants the Department of Planning and Permitting (DPP) and the City Council broad discretion over proposed projects.  The IPD-T permitting process is modeled after the planned development permit process in the Waikiki Special District.  The process includes appearing before a neighborhood board, filing an application with DPP, conducting a public hearing, submitting a DPP approved conceptual plan to the City Council for consideration and approval, and finally acquiring the IPD-T permit from DPP.

Under the IPD-T process, the City will grant certain development rights not allowed under current zoning in exchange for certain "contributions" by the developer.  Among other things, the City will favorably consider provision of the following contributions by the developer:
At least 50 percent of the affordably requirement must be provided on-site.  The total required number of affordable units is set by the City's affordable housing rules (which have not yet been adopted).  A developer may provide off-site affordable housing within 1/2 mile of a transit station under the following conditions: (1) 50 percent of rental units, if they are priced at 60 percent affordability for 60 years; or (2) 35 percent of rental units, it they are priced at 80 percent affordability for 20 years.

In return for the above contributions, the City may grant the following entitlements:
The IPD-T process may be a good fit for developers who desire early entry into the TOD market.
Posted by Hawaii Land Use Law and Policy at Thursday, February 12, 2015
Email ThisBlogThis!Share to TwitterShare to FacebookShare to Pinterest
Labels: Transit-Oriented Development (TOD)